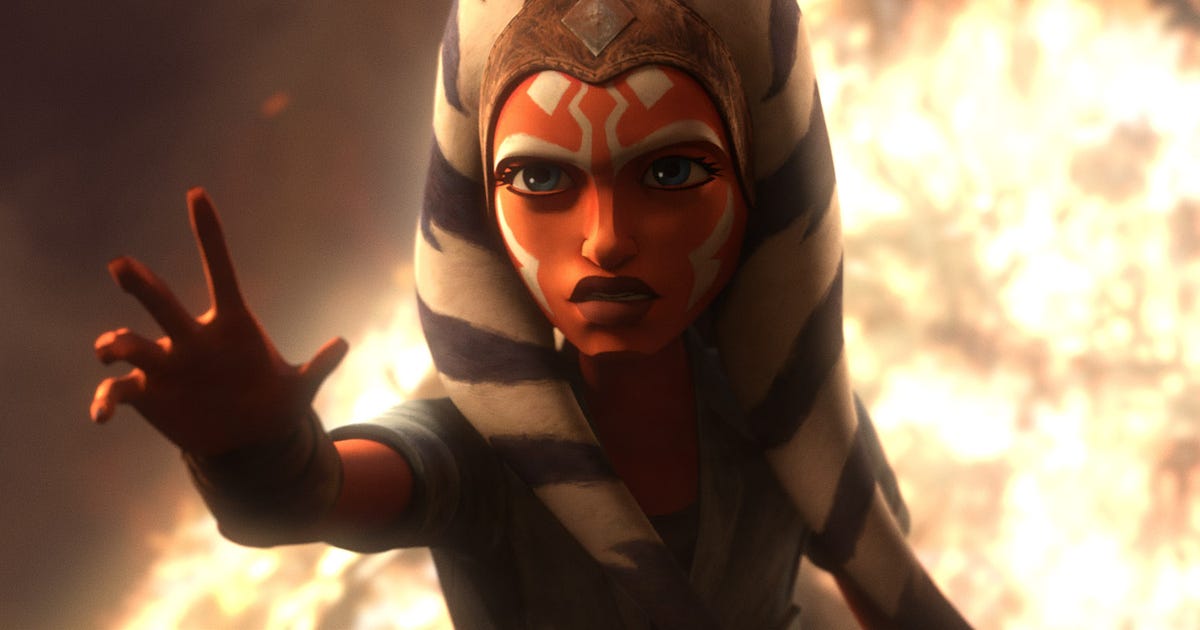 Star Wars: Tales of the Jedi came to Disney Plus on Wednesday, bringing six short films in the same CGI animation style Clone Wars. Three follows the legendary Jedi Ahsoka Tano (years before she met the Mandalorian), while others reveal the backstory of future Sith Lord Count Dooku during his Jedi career.

It is installed in a prequel to an eradecades before the events of the original Star Wars film. A new hope and the current live show Andorra.

The series is written by Clone Wars executive producer Dave Filoni, who is currently working on the series ahsoka live series which is slated to release on Disney Plus next year. He wrote episodes during that time flies back and forth to shoot the Mandalorian.

Jedi Stories Ashley Eckstein returns as Ahsoka, who has voiced the character since her debut in The Clone Wars in 2008, the series, the next show Rebels and The Rise of Skywalker (Rosario Dawson plays the live-action role).

In addition to her acting work, she also founded a fandom-focused fashion label Her universe and a series of voice-guided meditations Star Wars: Careful Affairs and co-authored a book of activities, recipes and crafts Star Wars every day.

Also in the shorts is the return of Corey Burton as the voice of Dooku, a role he first played in the Clone Wars video game, which was released exactly 20 years ago on Friday. Inspired by the Sith Lord actor’s performance Christopher Lee, he went on to play the role in the 2008 Clone Wars show. He also voiced bounty hunter Cad Bane in this series and Boba Fett book.

Over a 50-year career, Burton played a staggering number of roles outside of Star Wars, portraying a wide range of Disney, Marvel, DC, Looney Tunes and Transformers characters. You have undoubtedly heard his works many times.

I got to speak one-on-one with Eckstein and Burton via Zoom about returning as Ahsoka and Dooku in A Jedi Tales, their favorite episodes, how their approach to the characters has changed, the Fir’s way of speaking, and the continuing influence of the Star Wars creator George Lucas.

Here is a transcript of our conversations, edited for clarity and woven together as Tales of the Jedi. Minor SPOILER a warning for episodes.

Q: Ashley, do you have a favorite Ahsoka episode?
Eckstein: Practice makes perfect [the fifth episode]simply because it was really nice to get the band back together [several other Clone Wars actors reprise their roles]. And it was really cool to see all the connections – there were so many layers to this episode. It made you smile; it made you laugh. It made you cry; it broke your heart. I don’t know how in the world Dave Filoni packed so much emotion into one episode, but it was truly genius.

I only got script pages for my lines, so I didn’t know how the episode ended. So I was totally shocked when I found out. And believe me, tears were definitely shed.

Practice Makes Perfect is fascinating because it jumps to several points in Ahsoka’s timeline and career. How did your approach to the role change?
Eckstein: I’m very lucky because I was cast as Ahsoka just to be myself, and I really got to help create that character. I’ve never written for a character because Dave and his staff have written the most brilliant stories. But I put a lot into her voice – her humor, her sarcasm, her sarcasm.

Ahsoka is truly a part of my heart and soul at this point. And because it’s so much my personality, it’s easy for me to go back to that. The timbre of her voice depends on her age. In Jedi Chronicles, it’s Ahsoka’s early days, so I went back and watched The Clone Wars, episodes from Season 1. So it was definitely a blast from the past and it was a lot of fun.

Isn’t it a little alarming that she’s been stunned so many times while training with clone troopers?
Eckstein: Ever since my husband [former MLB player David Eckstein] Used to play sports, my brain was like, “Oh, she might have a concussion.” It really brought me to tears how much Anakin could love her. He knew that if she trained the way the rest of the Jedi trained, she wouldn’t survive, and I’m just talking about everyday life – I’m not talking about Order 66. He had to do this different way of training.

That’s what makes it even more heartwarming. What I love about The Clone Wars is that we get to see the hero Anakin — just to see what could have been if he hadn’t turned to the Dark Side. Was he cruel to her? Undoubtedly. But did he save her life? Undoubtedly. This short film just took this sibling-like love to a whole new level.

Corey, you’ve played Dooku for two decades, how has your relationship with the role evolved?
Burton: I’m a radio actor, so I’ll go deep into the role with the pages in front of me, the director in my ear – I’m trying to do what’s in the director’s head. A good director will convey the writer’s ideas to me. If it’s really well written, the character is right there on the page.

[With Dooku], I started by imitating Christopher Lee and trying to replicate his acting. When we started the Clone Wars series, we were told through Dave Filoni by George Lucas to own the characters because he wouldn’t be doing any more movies.

So it was all animation and we were the cast, so that changed. Together with Dave, the writers and other people associated with the character, we gave him a better dimension, making him a duplicitous, invariably suave politician and a younger, more muscular one. Although behind it all there were always dark Sith.

Dooku has a tense encounter with Yadl in his third episode, Lord of the Sith. She looks the same as Yoda, but doesn’t speak with the same unusual syntax as Yoda – I’m interested in your take on that as a voice actor.
Burton: I tend to be a little hazy on the details of various kinds. I don’t know if I got a clear explanation of why Yoda speaks in his special syntax – we don’t know if Grog (aka Baby Yoda, from The Mandalorian) will.

This can be a very character-specific thing, especially since Yoda is a swashbuckler; these are all riddles and puzzles from a great master and teacher. Maybe we’ll find out if this is Yoda’s own technique.

In the same episode, watching Dooku choose between Juniper and Darth Sidious is so much fun. Logically, we know he’s going to turn to the Dark Side, but it’s easy to get caught up in his insecurities in the moment and feel like he’s slipping back and forth between light and dark.
Burton: As an actor, it’s fun going from light to dark. This could happen with any transformation; suddenly that little hint of the future slips away – the other side is just trying to get out.

A Jedi Chronicles pits Ahsoka and Dooku, two Jedi who have left the Order and taken very different paths. Why do you think it works so well?
Eckstein: I think we’re fooling ourselves if we don’t think we’re a balance of light side and dark side; every day we wake up with a choice.

I am a huge advocate for mental health. We all have feelings of anger, aggression, worry and doubt. You know, we all have it too – we can choose to feel peace, calm, love, kindness and light. We can’t always control what happens to us, but we can control how we react to those situations and then the choices we make from there.

So many horrible things happened to Ahsoka; we see them unfold in The Clone Wars, Rebels, and Jedi Tales. In response to these things, she chooses love, she chooses to help people, she chooses kindness. And Dooku obviously chooses a completely different path.

How do you feel George Lucas’ legacy continues in Jedi Chronicles? You’re both part of a fairly small group of actors who have worked on Star Wars since its days.
Eckstein: Dave Filoni is definitely George Lucas’ padawan; it’s a role he takes very seriously, and he wants to honor George in any way he can. I don’t think there’s anyone who really trained George Lucas like Filoni. So I think if this is a project that Dave is working on, there will definitely be bits of George in there.

I hope George is proud of Jedi Stories – I don’t know if he gets enough credit for The Clone Wars because he worked tirelessly on it and it was a very passionate project for him. It was financed by him in the pre-Disney days when we had to do it for five seasons. And I can’t say that other places would even keep an animated show going for the five seasons that we did. So I am very grateful to George Lucas. And I think his legacy lives on in this show.

Burton: Dave keeps in touch with George all the time, as far as I know. The way Dave talks about George [suggests that] he himself reminds Yoda, saying, “He’s always fooling me.”

Everyone is swayed by his vision, and hopefully we’re all on board with … what he envisions for the entire Star Wars universe.