Swimming with the Mermaid Robot: Up Close with a Stanford Deep-Sea Explorer 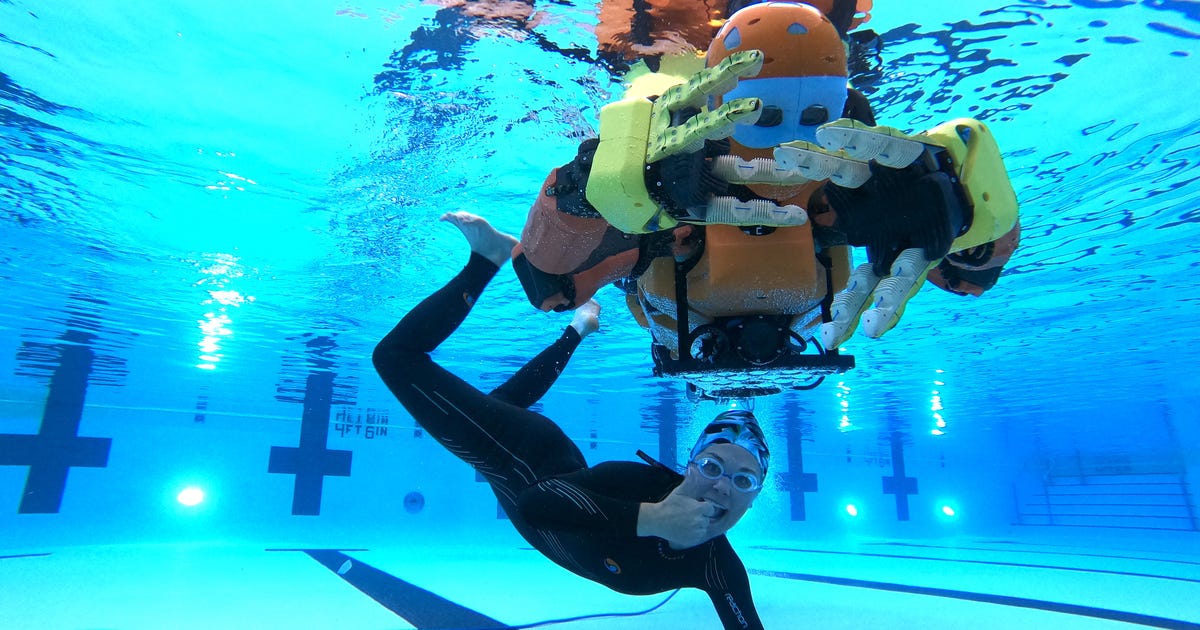 It’s a sunny day at the Stanford University Recreation Center and I’m about to swim with the robot. I’ve rented my wetsuit from the friendly guy at Sports Basement (“You can take it surfing, but I’m not sure about diving with robots,” he says), and I’m armed with a GoPro to capture my candid close-up shots. ups with the bot in question.

I’m here to see OceanOneK, a deep-sea robot developed by a team at the Stanford Robotics Laboratory led by roboticist Osama Khatib. Capable of diving to a depth of 1,000 meters (hence the name “OneK”), or just over half a mile, this humanoid robot is designed to offer human control in a robot body – it has a movable head with two stereoscopic cameras and two arms that can extend and manipulate objects with fingers.

Propellers on the robot’s body help it move through the water, but the bot’s real genius lies in its tactile controls. A human operator outside the water uses free-motion joysticks to control the robot and move its arms, while stereoscopic cameras provide a three-dimensional view of the underwater landscape (the operator can watch the inputs of the two cameras in split-screen or full-depth mode, wearing 3D glasses).

The idea is that the robot can dive to depths humans can’t, while providing the dexterity and dexterity you’d get from a human diver.

“The ocean is basically your hands, your eyes,” says Khatib. “This is your avatar in the water.”

The robot began life as a prototype known as OceanOne. After initial development and testing, Khatib and his team took OceanOne on a series of dives in the Mediterranean Sea in 2016. But even though the design worked, the team members realized they wanted to go deeper underwater. So Khatib began work on OceanOneK, a new, stronger robot that could dive nearly 10 times deeper than the original robot and explore further.

But going deeper also meant reengineering the robot to withstand atmospheric pressures that are about 100 times that of the first robot. To do this, Khatib and his team filled the robot’s arms with oil and installed special spring mechanisms that could compress the oil according to the surrounding water pressure. The design not only protected the sensitive electronics inside the hands from being crushed, but also allowed the robot to float.

But why build a humanoid robot at all? There are already commercial robots and deep-sea research vehicles that can survive deep underwater without looking like a bright orange Aquaman robot.

According to Khatib, form follows function, namely the ability to explore complex deep-sea environments such as shipwrecks and handle fragile objects such as artifacts or coral.

“In this environment, you can’t work with one arm or one arm. When you put your hand behind your back and think about how you’re going to do something, it’s really difficult… So you need two hands,” he said. said. “Then you need to see your hand when you move. You’re already getting the upper body of a human. But remember, it’s a mermaid, it’s not a human. We didn’t put our feet on it.”

In 2022, Khatib and his team of engineering students returned OceanOneK to the Mediterranean, testing the robot at various depths. For Khatib, the highlight was diving to the wreck of the Italian steamship Le Francesco Crispi at a depth of 500 meters.

“Approaching Krispy’s was one of the most incredible experiences I’ve ever had,” Khatib said. “You look through the robot’s eyes and you see the robot’s hands, and now they’re your hands, you’re moving them.”

Back at Stanford University, I sat down at the pool console and operated OceanOneK. It was surreal to see the robot’s arms stretch out in front of me, its fingers opening and closing as I opened and closed my hands on the controls.

But the most impressive thing was that I zipped up my wetsuit and dived. Approaching the robot underwater, it was amazing to see how human it was – as if I was swimming next to a fellow diver (albeit one who could hold his breath longer).

I swam with a deep-sea robot designed to outlive humans

While the university’s recreation center pool is a long way from the sunken ship, it was easy to see how OceanOneK could revolutionize deep-sea research. While we may not be able to dive 500 meters underwater to see a historic shipwreck in person, OceanOneK can get to know us personally, giving us an experience close to the real thing.